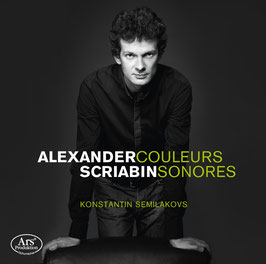 I am happy to sign this CD for you!

1) Press the button 'Add to my cart', 2) on the next page, please write in the field 'Notes' if you would like to have your CD booklet signed, and if you further want me to inscribe your name.

Semilakovs has a strong point of view. On the whole, these are rich readings, with soft articulation and (as you’d expect) a sumptuous tonal palette (there’s no hard edge even in the fff passages, and the sound never bleaches out even in the moments of extreme intimacy). Rubato is fairly generous, too, although he never loses the pulse—and while he captures the shapes of the quirky gestures in the later pieces (most notably the Seventh Sonata) with astonishing finesse (no approximation here), the music never hardens as it can if it’s given a Modernist spin. Dynamics are granted their full emotional power, as are all the Scriabinesque expression markings in the score. For all this Romantic sensibility, though, there’s no barn-burning here, no self-conscious virtuosity, even though nothing in this often treacherous music—not the rapid-fire swarms of notes, not the tricky superimposed rhythms, not the ecstatic surges—seems to throw him.

In sum, a first-rate addition to the Scriabin discography— and, given that it appears to be a debut CD, a doubly astonishing one. Strongly recommended.

The opening prélude is a guide to what's to come, beautifully paced with subtle rubato and superbly graduated crescendo. He dances within the phrases of the second and I could lose myself in the timeless fragility of the haunting fourth prelude. His drive in the sixth leads perfectly into the effortless fluency of the A major prelude. All through this set there is characterful playing; the gracious approach to the waltz prelude no.17 or the grand sweep of the C minor.

[...] I was most impressed by his delicate shading and weightlessness of tone in many of the quieter passages; the sensuous trills and delicate passage-work in the opening pages of the fourth sonata and the interpretation of Scriabin's ripe expression markings - céleste volupté and animé, ailé. He negotiates the dense writing of the latter with aplomb and this can also be said of his dizzying vers la flamme. His tremolandos here are terrifying and the warning bells high in the piano are shrill in their alarms.